A History of Greek Funerals

As a society that embodies the spirit of art, exploration, and culture it’s unsurprising that the history of Greek funerals is as captivating and enlightening as the people they honour. From prothesis to commemorative feasts, read on for a brief history of the Greek funeral.

To ancient Greeks, the spirit (or psyche) left the body in a breath of air. From there began prothesis, the preparation for the recently departed’s final journey. First, female family members gathered to bathe the body, anointing it with oil before dressing it in simple clothes. To ensure successful passage across the river Styx, a coin was placed in the deceased’s mouth to pay for the ferry.

Eyes and mouth closed, the body was enshrouded and laid on a funeral bed, feet facing the door, to receive mourners intent on visiting and paying their final respects. Throughout prothesis, the haunting sound of funeral lament could be heard, first sung by the family and later joined by a professional hired to perform threnos. 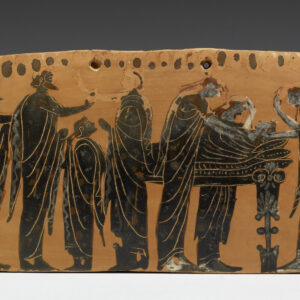 In the early hours of morning following prothesis, the deceased was transported either by pallbearers or horse-drawn carriage along the streets to make their way to the cemetery for burial. This procession, called ekphora, included musicians, friends, and family, all expressing their sorrow through mournful song and physical expressions of grief. Unlike contemporary services which often find mourners stifling outward expressions of sadness, ancient Greeks were encouraged to grieve publicly.

Once the procession reached the cemetery, the deceased was placed in a larnax, a small, often elaborately carved box. From there, it was either cremated on a funeral pyre or interred, the grave marked by a commemorative stele to ensure that the departed would not soon be forgotten.

Following the burial or cremation, a feast hosted in the name of the deceased’s was held as a way to give thanks to those who had participated in the funeral rites. Because significant importance was placed on the perpetual remembrance of the dead, there was an emphasis placed on visiting the grave, particularly on the 3rd, 9th, 13th, and 30th days after the burial took place. The tomb was decorated and offerings were made in the form of food and wine.

Today, Greek funerals draw some inspiration from the services that preceded them. Visitations typically take place the day and evening before the burial and serve as a time for family and friends to share stories and memories. Often, a priest will visit to hold a service where he will lead prayers and hymns.

The funeral itself is held in a church and includes a Trisagion service. Mourners are invited to pay their last respects to the deceased before the casket is closed and transported to the cemetery for burial. Once graveside, a short prayer ceremony is held, flowers are placed at the grave, and the casket is interred. Following the service, mourners visit the bereaved family to offer their condolences and partake in a makaria,a meal not unlike the one that followed a funeral in Ancient Greece.

Following the funeral service, it is customary to observe a 40 day period of mourning. On the Sunday closest to the 40th day following death, a memorial service is held in church in remembrance of the deceased. A similar service takes place every year thereafter, on the anniversary of the person’s passing.